California leads the U.S. in pesticide use. Between 2004 and 2015 more than 2 billion pounds of active ingredients were applied in California alone.

These pesticides are applied in schools, in and around homes, on roadsides and on farmland. Picked up by winds and water, these chemicals are distributed to nearly every corner of the state and are commonly found on food, in surface water and groundwater, and in the air. Nearly 20% of the total pesticides used in the U.S. are used in California, a startling statistic considering that California cropland represents only 2-3% of the total planted acreage in the U.S. This high use of pesticides is clearly related to California’s production of many high-value fruit, nut and vegetable crops, as well as its large urban populations.

Many Pesticides Used in California Among the Most Hazardous

A significant fraction of pesticides used in California are “Bad Actor” pesticides capable of causing acute poisoning, cancer, birth defects, sterility, neurotoxicity, damage to the developing child and/or contamination of California groundwater. Of 213 million pounds of pesticides reported used in 2015 in California, 23% meet one or more of these criteria.

Pesticide Use Data and Maps 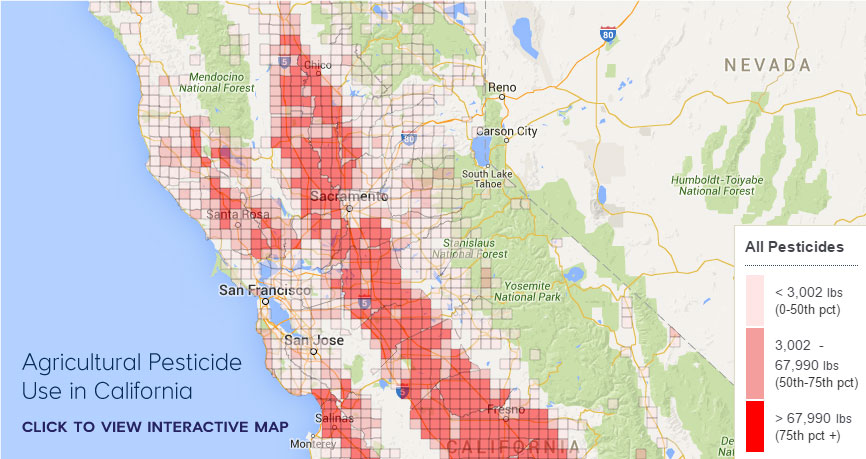 In mid-August 2003, mosquitoes carrying West Nile Virus (WNV) were found in California’s Salton Sea, at the southern extension of an important bird migration route. While the West Nile Virus is common in mosquitoes in Africa and Europe, the first U.S. human case was reported in 1999 in New York State. The number of human cases has increased each year; so far in 2003 the U.S. Centers for Disease Control (CDC) reports 2,874 human cases and 53 deaths (as of September 9, 2003).

In the years since the first outbreak, the CDC and local vector control agencies have altered their public recommendations on dealing with West Nile. There is now much greater emphasis on public education, on the removal of standing water as mosquito breeding sites, and application of larvicides instead of widespread sprays targeting adult mosquitoes.

However the spraying of adulticides does continue, even though it is inefficient for controlling mosquitoes and may even increase mosquito populations by decimating the predators (such as dragonflies) that feed on mosquitoes and their larvae. In a new report on the risks of pesticide spraying for West Nile, Pesticide Watch lists two organophosphate pesticides, malathion and naled (sold as Dibrom) which are approved for use in California against mosquitoes. Organophosphates are a highly toxic class of pesticides affecting the central nervous, cardiovascular and respiratory systems. Malathion and naled have both been linked to cancer, and malathion has been associated with blood, vision and reproductive disorders. Synthetic pyrethroids, such as sumithrin (Anvil) and permethrin are also widely used on mosquitoes. Both can cause dermatitis and asthma-like reactions.

Several cities and towns have vowed not to spray adulticides for West Nile. Lyndhurst, Ohio, a suburb of Cleveland, passed a landmark ordinance in early July of 2003, and Ft. Worth, Texas and Washington, DC have both pledged not to spray.

Background information on WNV and Alternatives:

Read the report “Overkill: Why Pesticide Spraying for West Nile Virus May Cause More Harm than Good”.

Go to the No Spray Nashville website and read about cities that elected not to spray pesticides, examples of safer mosquito control programs, and other health related information.

Visit the Northwest Coalition for Alternatives to Pesticides (NCAP) website for information on alternatives to and factsheets on the hazards of pesticides.

Visit the Beyond Pesticides website and read the following publications: Public Health Mosquito Management Strategy to learn more about methods of mosquito management to prevent WNV, and The Truth About West Nile Virus, which asks what are the real risks from the disease and what is the chemical response to it.