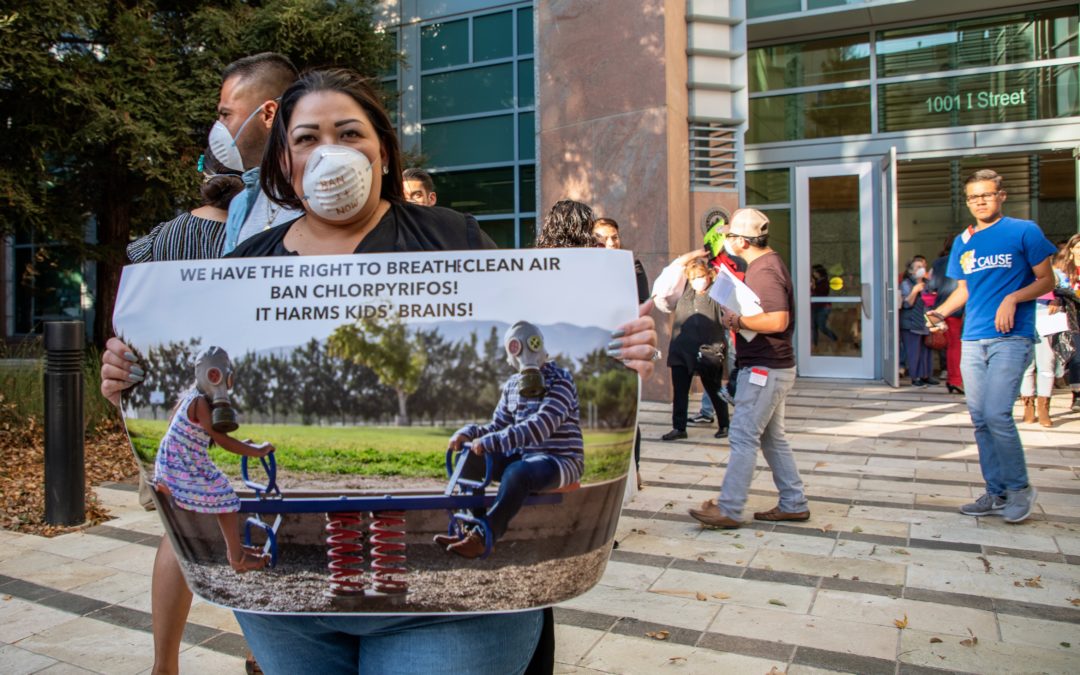 Sacramento: Under intensifying pressure from a large coalition of health, education and environmental justice advocates, state regulators today announced a set of interim recommended measures aimed at limiting exposure to the hazardous organophosphate pesticide chlorpyrifos, known to cause permanent brain damage in young children. But the measures fall far short of the ban many are calling for. State regulators have found that young children in California risk permanent neurotoxic effects from exposure to unsafe levels of chlorpyrifos in their food, water and air.

In comments to the Associated Press, California Department of Pesticide Regulation (DPR) spokesperson Charlotte Fadipe described the measures as “like our short-term fix,” adding in a press release that a permanent fix would take two more years.

But advocates pushed back against this timeline, noting that the Department should immediately halt use of chlorpyrifos in accordance with State law because it has “demonstrated serious uncontrollable adverse effects” and is “detrimental … to the public health and safety,” even when used properly.

“We’re disappointed that once again, DPR is undercutting protections ordered by the Federal courts and adopted by Hawaii to put an end to the use of brain-harming chlorpyrifos,” said Mark Weller, Co-Director of the statewide Californians for Pesticide Reform coalition. “Kicking the problem to the counties is simply not good enough. DPR needs to exercise leadership, follow the science and the law, and ban this brain-damaging chemical now.”

Thursday’s announcement is the latest salvo in a decade-long battle to end use of what is among the most hazardous pesticides still used in California. In 2016, after years of study, the US EPA found that children face an unacceptable risk of brain harm from exposure to chlorpyrifos, and recommended a nationwide ban. The Trump Administration reversed the proposed ban in 2017. This year, Hawaii became the first state in the nation to pass a ban, and a federal court ordered the US EPA to reinstate the national ban – a decision Trump’s Department of Justice is challenging.

Meanwhile, California regulators in June finalized their own scientific findings, agreeing with US EPA scientists that chlorpyrifos poses an unacceptable exposure risk to all young children in California. But so far the state has refused to take decisive action that would protect Californians from a chemical linked to permanent IQ loss and a host of neurological harms.

“The only way to protect our children from this toxic chemical is to ban it—and this does not come close to doing that,” said Allison Johnson, Sustainable Food Policy Advocate at the Natural Resources Defense Council. “These measures are temporary and will not eliminate much of the chlorpyrifos used on food grown in California communities and eaten by families across the country. With the Trump administration fighting tooth and nail to keep this dangerous pesticide in our food supply, we need our state leaders to protect us. California must recognize that there is no safe level of chlorpyrifos and get rid of it once and for all.”

The recommended restrictions announced today by DPR include a minimal 150-foot setback from homes and schools and limited restrictions on the crops and pests the chemical can be used on. But chlorpyrifos will still be sprayed on many common crops, including grapes, nuts and citrus. The measures are offered as recommendations for County Agricultural Commissioners in the pesticide application permit process.

For those living in California’s farmworking communities, Thursday’s announcement from DPR came as a particularly devastating blow. “These measures don’t protect our kids from brain harm. We expect this from Trump, but we hoped for better from California,” said Angel Garcia, community organizer for the Tulare County Coalition Advocating for Pesticide Safety. “We don’t understand why DPR continues to nibble around the edges, when their own science has told them this chemical must be banned.”