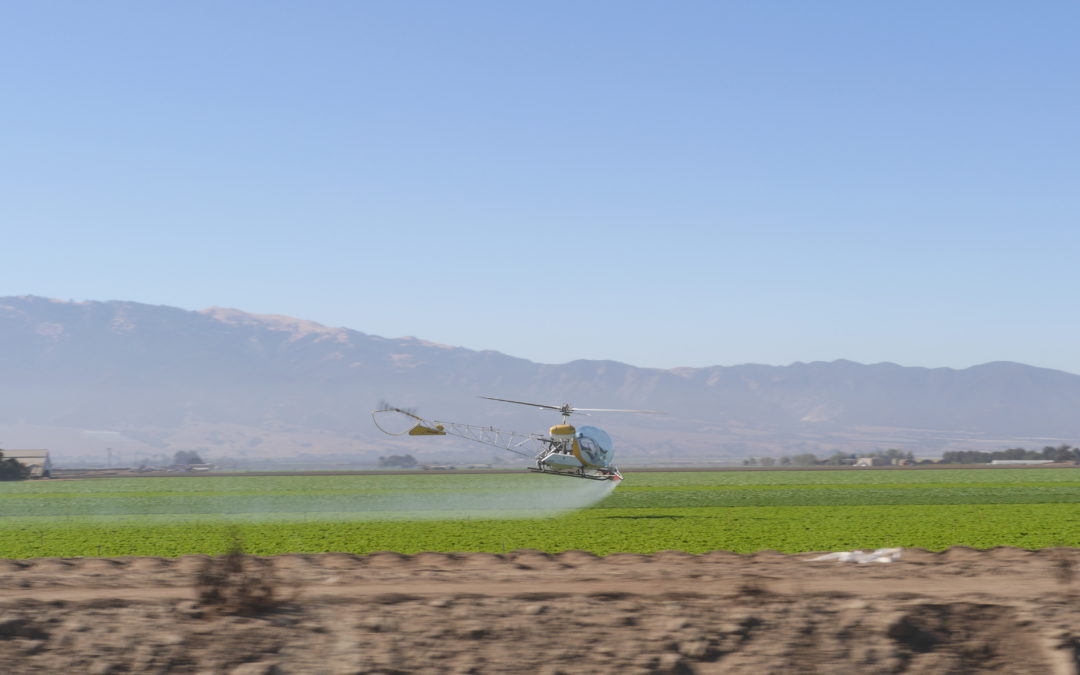 Pesticide use is significantly higher in majority Latinx counties

Sacramento: Agricultural pesticide use in California remains at a near-record high, according to data quietly released at the end of the year by the state agency responsible for tracking pesticide use. The California Department of Pesticide Regulation’s (DPR) latest numbers paint a stark picture of the state’s continued reliance on vast quantities of agricultural pesticides – 209 million pounds in 2018. That’s the third highest since reporting began in 1990, and the fourth year in a row the total has topped 200 million pounds. Many pesticides are hazardous to human health, some are classified as Toxic Air Contaminants and Volatile Organic Compounds, and there’s an increasing awareness of their contribution to climate change and biodiversity loss, including bees and other pollinators.

“Agricultural pesticides are linked to a wide range of human health harms,” said Mechelle Perea-Ryan, a San Joaquin Valley nurse and member of the Alliance of Nurses for Health Environments. “The health risks include cancer, birth defects, autism, Parkinson’s, and asthma.”

“These numbers are cause for great concern,” said Sarah Aird, co-director of the statewide coalition Californians for Pesticide Reform. “Over the past four years, we’ve returned to the record high levels of pesticide use of the 1990s. It appears that California agriculture is continuing down the same unsustainable path, as reliant on hazardous chemicals as we were thirty years ago. Our state’s regulators have to do more than just report these numbers. It’s time for a shift toward policies that actually reduce their use.”

“Racial injustice is baked into California’s system of agriculture, and the latest pesticide use numbers confirm that these egregious inequities won’t go away by themselves,” said Nayamin Martinez, Executive Director of Fresno-based Central California Environmental Justice Network. “There are state and federal civil rights laws that forbid this kind of systemic discrimination that unduly burdens one group over another, and yet it persists. California’s racial reckoning must extend to agriculture, and must address the toxic burden that is overwhelmingly borne by communities of color.”

The greatest burden continues to be borne by the San Joaquin Valley, with well over half (108 million pounds) used in just five counties – Fresno, Kern, Tulare, San Joaquin and Madera. That equates to 33 pounds of pesticides for every person in those counties. Fresno County, where more pesticides are used than any other county, saw an increase over the prior year of 2.7 million pounds.

The continued high rates of agricultural pesticide use have amplified calls from public health advocates for new policies that provide advance notice before hazardous pesticide applications. Currently, despite the prevalence of pesticides and their known health impacts, Californians have no right to know about planned pesticide use.

“As long as our agricultural system continues to depend on vast inputs of pesticides, the state must do better at letting people know what’s planned on our farms and fields,” said Bianca Lopez, founder of Modesto-based Valley Improvement Projects. “Many of these chemicals are highly toxic and yet they continue to be sprayed by the millions of pounds on our food crops, right next to homes and schools, endangering residents and workers alike. The lack of transparency needs to end. We want to know where and when those 200 million pounds are being sprayed before it happens, not years after.”

While the picture from 2018 is bleak, there are signs of a shift that began with the arrival of the Newsom Administration in 2019 and new leadership at the Department of Pesticide Regulation, along with a renewed focus on public and environmental health. One of the first acts of the new administration was to announce a ban of the brain-harming pesticide chlorpyrifos, which took effect on January 1. Because of lengthy delays in reporting – 2018 data only became available in the last week of 2020 – it will be another year before it’s known whether new leadership has translated into changes in farming practices across the state that are substantial enough to shift pesticide use patterns.

“We know there’s a better way to grow food that doesn’t harm the very communities that grow it, and recent increases in organic production in the Monterey Bay region point the way for the rest of the state,” said Héktor Calderón, coordinator of the Monterey Bay area-based coalition Safe Ag Safe Schools. “Ending our state’s dependence on harmful chemical pesticides is the path toward a sustainable future for agriculture in California.”