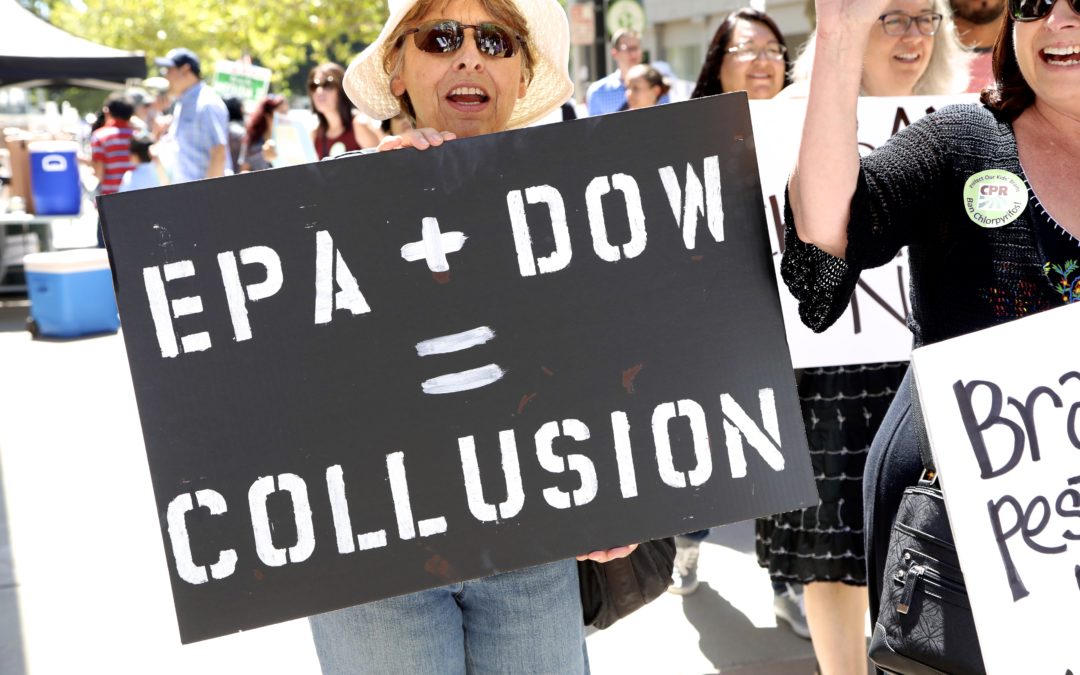 Bakersfield, CA – The Kern County Agricultural Commissioner confirmed today that one of the pesticides involved in a major pesticide drift incident that affected nearly 50 farmworkers in May was chlorpyrifos, a brain-harming pesticide U.S. Environmental Protection Agency (EPA) officials failed to ban in March.

As many as 37 workers in a crew of 48 cabbage pickers and packers at a field south of Bakersfield began feeling ill about an hour into their shift early on May 5th. Some began fainting and vomiting, and at least five workers received medical attention.

The pesticides involved in the incident drifted a half-mile from where they were applied, in violation of California law.

Of particular concern was the involvement of chlorpyrifos, exposure to which can cause severe and permanent health harms. Independent research from University of California (UC) Berkeley and UC Davis has linked chlorpyrifos exposure to autism, diminished IQ, ADHD and other neurological disorders.

Chlorpyrifos was slated to be banned by the U.S. EPA in March 2017 after agency scientists found the pesticide to be unsafe for use in any amount. Ignoring these findings, EPA Administrator Scott Pruitt denied the ban at the last minute. California officials are now considering moving forward with a similar statewide ban based on the assessment by EPA scientists.

Farmworker advocates cited the incident as evidence of the need to end use of chlorpyrifos, which is primarily manufactured by Dow Chemical Co.

“The EPA could have protected these farmworkers if they had followed the science,” said Valerie Gorospe, a community organizer with the Center on Race, Poverty, & The Environment. “Farmworkers and their families face potentially lifelong consequences from the agency’s failure to stand up to Dow.”

“These farm workers should never have been in the situation to be harmed by drift of this brain-harming pesticide,” said UFW Vice president Erik Nicholson. “Any exposure to a pesticide is a potentially dangerous situation. The EPA’s reversal of their decision to ban chlorpyrifos has made this situation even more dangerous for these farm workers who labor so hard to bring us our food, as well as for their loved ones at home. It’s another example of why farm workers need laws with real enforcement to protect them, and why we all need to ensure the food we eat is safe.”

Workers at the site received inadequate training on what to do in the event of pesticide drift, and many left the scene before paramedics arrived. The fines levied against the two companies involved in the incident go directly to the county agriculture commissioner’s office and won’t help the affected workers, many of whom lost wages and may have incurred medical expenses as a result of the incident. According to a statement by the Kern County Agricultural Commissioner, the fine for causing exposure to chlorpyrifos was just $3,000 per stricken worker — despite the potentially serious and permanent harm the chemical can cause.

Chlorpyrifos was not the only pesticide used nearby. According to the Kern County Agricultural Commissioner, sulfur was also found on plants near workers at the site. Although pesticides are regulated individually, an increasing body of research indicates that workers are often exposed to pesticides in combination, which may interact in ways that are currently little understood.

Advocates also point out that the distance of the drift — a half-mile — indicates that current protections are insufficient. Despite its high toxicity, product labels require only a 100-ft buffer zone for chlorpyrifos.

New rules proposed by the California Department of Pesticide Regulation to protect children from exposure to hazardous agricultural pesticides include a quarter-mile buffer zone from 6am to 6pm on school days around schools and daycares for the most drift-prone application methods — a safeguard advocates point out would have been insufficient in this case.

“This incident reminds us what the science clearly shows: pesticides can drift up to a half-mile or more. The proposed part-time, quarter-mile school buffer zone is simply inadequate to protect kids from pesticides like chlorpyrifos, which cause lifelong health harms,” said Paul Towers, organizing director for Pesticide Action Network.

United Farm Workers of America (UFW) is the nation’s first enduring and largest farm workers union. The UFW continues organizing in major agricultural sectors across California, protects thousands of farm workers under union contracts there and in two other states, and actively champions legislative and regulatory reforms for farm workers including issues such as worker protections, pesticide protection and immigration reform.

Pesticide Action Network (PAN) is one of five regional centers worldwide. PAN links local and international consumer, labor, health, environment and agriculture groups into an international citizens’ action network. Together, PAN challenges the global proliferation of pesticides, defend basic rights to health and environmental quality, and work to ensure the transition to a just and viable food system.