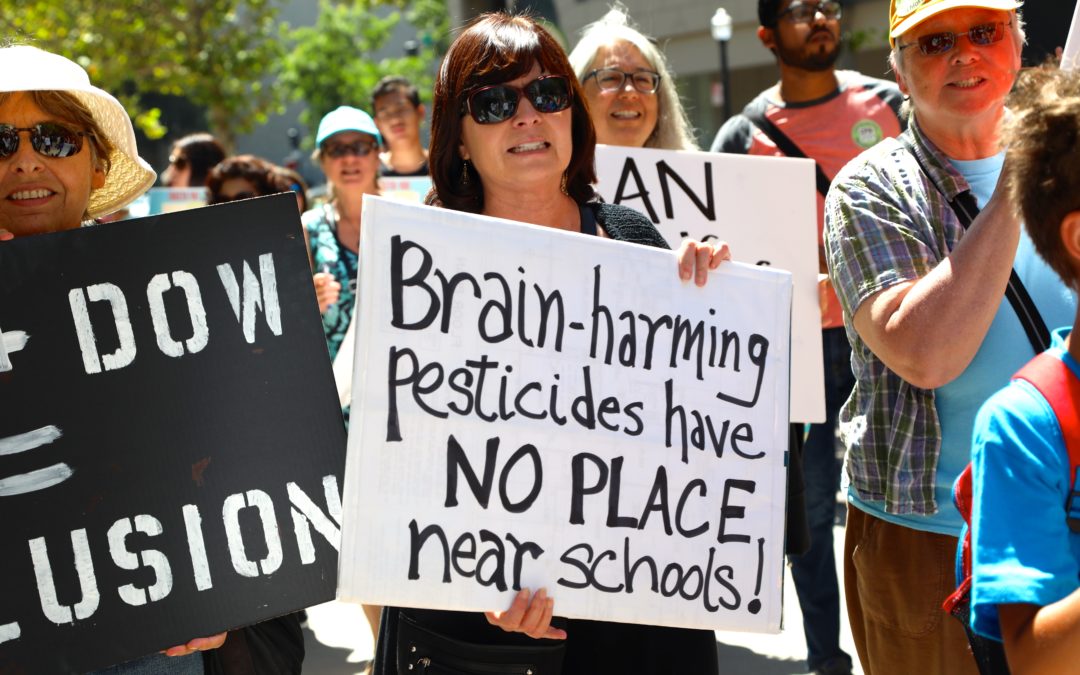 Residents converge on Sacramento to deliver over 100,000 petition signatures demanding state action after U.S. EPA failed to implement a ban

Sacramento, CA – After the U.S. Environmental Protection Agency (EPA) failed to heed the advice of its own scientists and end use of the brain-harming pesticide chlorpyrifos, more than 200 residents of California’s farmworking communities staged a rally today outside the headquarters of CalEPA and the California Department of Pesticide Regulation, calling for an immediate statewide ban.

Following the rally, a delegation delivered more than 167,000 petition signatures along with a letter signed by 75 organizations representing hundreds of thousands of Californians. The petition was run by Care2, Center for Biological Diversity, Center for Environmental Health, Center for Food Safety, Courage Campaign, CREDO, Friends of the Earth, and Pesticide Action Network.

EPA scientists and an overwhelming body of independent scientific evidence have documented that chlorpyrifos can cause neurological and respiratory damage, as well as developmental delays, autism and IQ loss for children — even in very small doses.

Chlorpyrifos use is particularly problematic in California, where more than one million pounds of the neurotoxic organophosphate pesticide are used each year, much of it in close proximity to schools and residences. Accounting for roughly 10% of the nationwide total, this chemical is applied on dozens of crops in the state, with almonds, walnuts, oranges and lemons among the most heavily treated.

“Chlorpyrifos use is a serious concern in the San Joaquin Valley,” said Angel Garcia, a community organizer based in Lindsay. “Living here, it’s not hard to see the devastating health effects caused by continued use of this hazardous chemical.”

After years of stalling, EPA was set to implement a ban on chlorpyrifos use on food crops in March. But under intense pressure from Dow Chemical, the largest manufacturer of the neurotoxic pesticide, EPA Administrator Scott Pruitt reversed the agency’s plan and announced he was allowing continued agricultural use of chlorpyrifos.

Just last November, the EPA announced that it intended to revoke all food tolerances of chlorpyrifos, calling exposure to any amount unsafe. Underscoring the importance of this proposed ban, the agency cited the serious dangers of chlorpyrifos exposure and added that young children risk exposure from food residues alone that are 14,000 percent higher than the level EPA currently believes is safe.

Science showing harms to children’s health, particularly their developing brains, is not new. The EPA phased out all home use of chlorpyrifos in 2000 because of the same concerns. For residents of farming communities where the drift-prone organophosphate is sprayed, the risk is far greater. A 2014 comprehensive study of environmental causes of autism, known as the CHARGE study, found that pregnant women who lived within a mile of fields where chlorpyrifos was sprayed more than tripled their chances of giving birth to a child with autism. Additionally, the UC Berkeley CHAMACOS team studying organophosphate impacts on women and children in the Salinas Valley found that every 522 pounds of combined organophosphate pesticide applications — including chlorpyrifos — within 1 kilometer of a pregnant woman’s home correlates with a two point IQ loss in her children at seven years old.

“We’ve known for over twenty years that chlorpyrifos is dangerous for kids,” said Carole Erickson, RN, PHN, co-chair of the Safe Ag Safe Schools coalition in the Monterey Bay area. “If it’s too dangerous to use at home, it’s too dangerous to spray near places where people live, work, go to school, and play.”

On June 6, California Attorney General Xavier Becerra joined the attorneys general from six other states in demanding a federal chlorpyrifos ban. Attorney General Becerra told EPA Administrator Scott Pruitt to “put the health of the American people ahead of profits for companies” and ban chlorpyrifos.

Residents of California’s farming communities, for whom banning chlorpyrifos has long been a top priority, are now turning to the California Department of Pesticide Regulation to take action. Advocates point to overwhelming evidence of the chemical’s dangers, documented in many studies and subject to rigorous, federal scientific review, as well as EPA’s ultimate conclusion that the pesticide is simply too dangerous to use.

“The EPA scientists said we should ban it.  Attorney General Becerra agreed.  We brought hundreds of people today and more than 167,000 petition signatures calling for a ban,” said Mark Weller, co-director of the Californians for Pesticide Reform coalition. “It’s time for DPR to ban chlorpyrifos in California.”

Headquartered in California, Pesticide Action Network (PAN) North America is one of five regional centers worldwide that represents a coalition of 600 public interest organizations in more than 90 countries. PAN challenges the global proliferation of pesticides, defends basic rights to health and environmental quality, and works to ensure the transition to a just and viable food system.