Sacramento, CA: This morning the Newsom administration sent notices to Dow and other manufacturers of its intention to cancel all registrations of the neurotoxic pesticide chlorpyrifos, the formal start of proceedings to cancel chlorpyrifos’ registration in California. The filing comes at a critical moment, in light of the US EPA’s most recent refusal in July to take federal action on the pesticide, which is linked to permanent brain damage in young children. Simultaneously, the Newsom administration announced formation of a multi-sectoral work group, convened by the California Department of Pesticide Regulation (DPR) and the California Department of Food and Agriculture to develop a statewide plan to support future California farming that’s less reliant on hazardous agricultural pesticides, such as chlorpyrifos.

“Today should be a day of celebration for all Californians – Governor Newsom is living up to his pledge to protect children from the hazards of chlorpyrifos while supporting farmers in their efforts to expand the production and availability of organic and sustainable food,” said Byanka Santoyo, Community Organizer for the Center on Race, Poverty & the Environment, based in Kern County, where 20% of the state’s chlorpyrifos is used.

“Establishment of an alternatives work group is critical and should include the latest cutting edge science on agricultural ecology, especially on soil and ecosystem health as a means to support crop resilience to pests, diseases and other disturbances, which can make the use of pesticides, such as chlorpyrifos, largely unnecessary,” concurred Margaret Reeves, staff scientist for Pesticide Action Network who was recently named to join the work group. 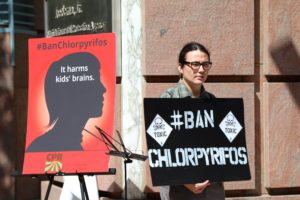 For a chemical known to cause irreversible brain harm, California continues to use almost a million pounds a year of chlorpyrifos, with use heavily concentrated in the San Joaquin Valley. Although the cancellation proceedings have now officially begun, the process could take nearly two years to complete, a continued concern for agricultural communities.

“Children of the San Joaquin Valley and other agricultural communities around the state have been the real victims. Every day that has passed since the Trump administration refused to ban this pesticide nearly two years ago has meant more children in California being born with ADHD, autism, developmental delays, and lowered IQ. After years fighting for the state to act to protect our communities, we are relieved Governor Newsom has stepped in to protect California children,” said Community Organizer Angel Garcia, with the Coalition Advocating for Pesticide Safety based in Tulare County, where much of the state’s chlorpyrifos is used in close proximity to residences. “Now we only ask that the proceedings move without delay. Our children are at risk as long as chlorpyrifos is allowed to be used in California.”

Californians for Pesticide Reform is a diverse, statewide coalition of over 190 member groups, including Center on Race, Poverty & the Environment, Pesticide Action Network, and Coalition Advocating for Pesticide Safety, working to strengthen pesticide policies in California to protect public health and the environment. Member groups include public and children’s health advocates, clean air and water groups, health practitioners, environmental justice groups, labor, education, farmers and sustainable agriculture advocates from across the state.