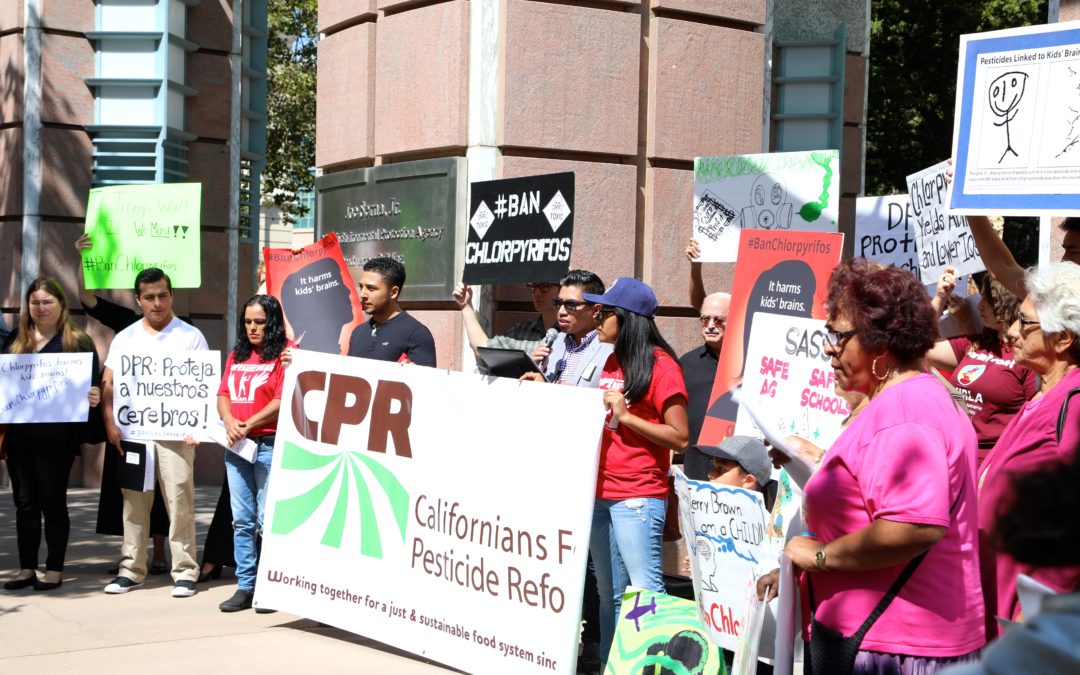 On October 3, 2017, officials at the California Department of Pesticide Regulation (DPR) issued recommended Interim Mitigations for chlorpyrifos to the state’s County Agricultural Commissioners. The mitigations are intended to reduce exposure to chlorpyrifos while DPR’s revised draft risk assessment for chlorpyrifos undergoes scientific review.

“The interim recommended permit conditions for the hazardous brain-harming pesticide chlorpyrifos issued today by DPR to the state’s county agricultural commissioners fall far short of offering the necessary protections from neurodevelopmental harms for California’s most vulnerable communities, including young children and pregnant women. They represent a stark betrayal of the commitment made in August by the Secretary of the California Environmental Protection Agency to the health and safety of all Californians.

Specifically, the setbacks established by the recommendation are not sufficient to protect neighbors and workers from drift exposure. Air monitoring study results show that chlorpyrifos continues to evaporate or volatilize for several days, and the proposed setbacks apply for only one hour after applications are completed. Furthermore, these permit conditions fail to limit both the size of individual applications and the number of airblast sprayers or aircraft that can be involved in a single application. Recent incidents of documented chlorpyrifos drift in Kern and Madera counties involved large acreages with multiple airblast sprayers or aircraft applying chlorpyrifos at the same time.

The fact remains that US EPA scientists last November found all current uses of chlorpyrifos on food-related crops put children at risk due to unsafe levels in our food, air, water, and workplaces. Like the Trump Administration, the DPR continues to ignore the top government scientists in the land and continues to put our communities at risk.

Nothing short of a total suspension of use will suffice to ensure the protection of the most vulnerable populations.”