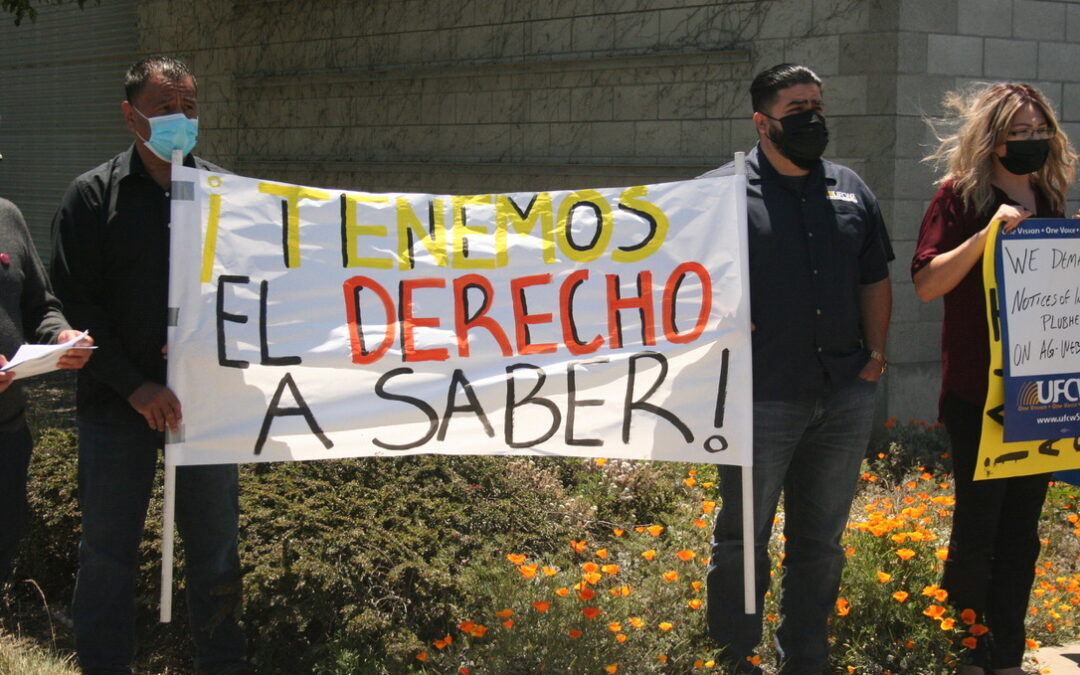 Sacramento – Californians in farmworker communities gathered Thursday online as well as in-person, calling on the state and county governments to web-post advance warning of agricultural pesticide use, citing the known health impacts of pesticide exposure and the tendency of pesticides to drift far from where they are applied. Currently, no notice is provided to the public. Advocates say that knowing in advance about hazardous chemical use near homes and schools would enable residents to take steps to protect themselves and their families from harm.

The statewide event, organized by Californians for Pesticide Reform, marked the birthday of Rachel Carson, whose book Silent Spring, published almost 60 years ago, exposed the health and environmental harms of DDT and other pesticides that leave a legacy of destruction. The event included a virtual online rally and simultaneous on-the-ground community delegations to County Agricultural Commissioner offices in Bakersfield, Modesto, Salinas, and Tulare. In addition, more than 23,000 people signed a petition calling for public notice. Signatures were collected by Californians for Pesticide Reform, Pesticide Action Network, Center for Biological Diversity, Natural Resources Defense Council, Friends of the Earth, Center for Food Safety, Center for Environmental Health, Physicians for Social Responsibility – Los Angeles, and United Farm Workers.

More than 200 million pounds of pesticides are used in California each year, with roughly 20% known to cause cancer and many linked to a variety of health impacts including asthma, autism, Parkinson’s, and developmental and reproductive harms. Many pesticides are known to drift far from their intended target, some traveling miles from treated fields.

As a first step toward a comprehensive statewide notification system, advocates are calling for advance online publication of “Notices of Intent” (NOIs), forms which growers must submit to county agricultural commissioners before they are permitted to use pesticides classified as Restricted Materials, those considered to be the most hazardous or drift-prone.

“NOIs are public documents, available to the public on request after the fact. But that’s too late for people living in harm’s way,” said Jane Sellen, co-director of Californians for Pesticide Reform. “We’re calling on the state to require this information to be made public in advance, so that people can protect themselves and their families. Continuing to allow drift-prone chemicals to be used in secret is a serious and ongoing threat to public health.”

Making NOIs public in advance is a simple, low-cost form of notification that builds on existing notice provided by growers to agricultural commissioners and imposes no new demands on growers. Notification would enable residents to take preventive measures such as closing windows, keeping asthmatic children indoors, or refraining from hanging laundry outside. Publicly available notice would also enable scientists to plan air monitoring for times when exposure is most likely to be measured.

“Here in Kern County, there is already a system in place to notify growers of pesticide applications by other growers. The system works great and costs almost nothing. So why not extend that notification to the rest of us?” said Shafter resident Felipa Trujillo, whose house is surrounded by treated fields. “It seems like the growers are afraid of the public knowing what they’re doing.”
The California Department of Pesticide Regulation has announced plans to develop a statewide notification on regulation, and the Governor’s revised budget, announced last week, includes $10m for that purpose, outlining a regulatory process that will extend through June 2024. However, advocates argue that NOIs are public documents that can be made public now, without spending years on the regulatory process. Previous efforts by DPR to develop a notification rule in 2016 quickly withered under a blast of opposition from industry, which adamantly opposes any move toward greater transparency.

“Agricultural commissioners act under the direction and supervision of the director of the Department of Pesticide Regulation. The state can use its existing authority to require county agricultural commissioners to post NOIs in advance on a public website,” said Paulina Torres, staff attorney with Delano-based Center on Race, Poverty and the Environment. “Since no burden would be placed on growers and pesticide applicators, no regulation is needed. The time to require more transparency is now, not years from now.”