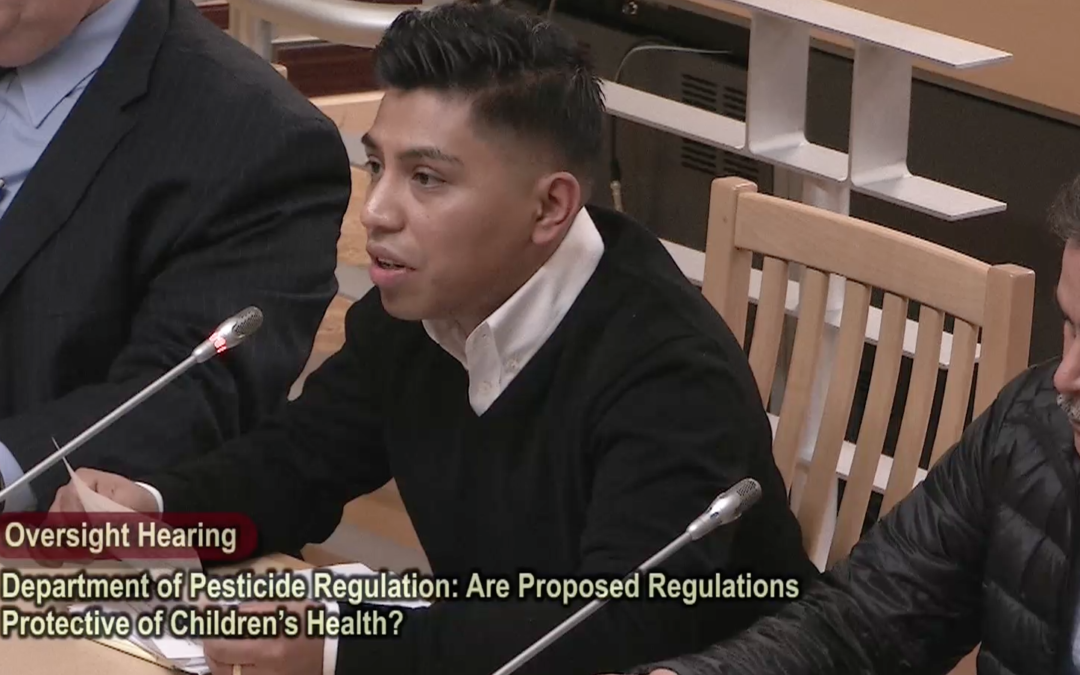 The Department of Pesticide Regulation director and his top advisor endured a grilling last week at a packed hearing convened by the California Senate Committee on Environmental Quality to consider the new schools regs.
Testimony from the panel of experts made clear that the real harm endured by farmworker communities is not from acute poisoning incidents but from chronic exposure  – and these regulations as drafted don’t address that problem.
DPR’s response?  Who cares.
DPR’s special advisor Randy Segawa described the regulations this way: “They’re not designed to reduce exposures.”
This was news to the residents and advocates who packed the hearing. “We’ve pushed DPR for years to come up with rules to reduce pesticide exposure at school,” commented CPR co-director Sarah Aird. “So it’s outrageous to hear DPR walk away from their commitment to protect kids in California’s most impacted communities.”
Speaker after speaker at the hearing pointed out that the biggest problem is not with headline-grabbing – but fairly rare – acute exposure incidents, but with the long-term health effects of chronic exposure, especially on young children.
California Department of Public Health director Dr. Karen Smith put it plainly: “Repeated exposures to low-level pesticides contribute to chronic negative health effects.”
Senator Nancy Skinner (D-Berkeley) added, “I’d rather have a single acute reaction than to be exposed to pesticides from infancy over a prolonged time.”
Industry representatives agreed. “You’re right to be concerned,” said Roger Isom, president of Western Agricultural Processors Association. “We don’t want to spray pesticides, that’s the last thing we want to do.”
So why isn’t DPR trying to reduce exposure?
The four-hour long hearing also considered the provision to notify schools of planned pesticide use – a key demand of community members.
Senator Patricia Bates (R-Laguna Niguel) warned that notification would cause “panic” and “mayhem” for schools in ag communities. Mr. Isom concurred: “Organophosphates are a nerve agent, when Joe or Ms. Homeowner sees ‘nerve agent’, they’re gonna pull their kids out of school.”
However, the predicted mayhem has not materialized in Kern and Monterey, two counties that have implemented pilot notification programs, according to testimony from Francisco Rodriguez, president of the Pajaro Valley Federation of Teachers, and Jeff Rasmussen, Agricultural Pesticide Control Advisor in Kern.
For community members, “notification is an integral component that cannot be left out of these regulations,” said Tulare County organizer Angel Garcia. (Angel’s testimony starts at 2:59, public comment starts at 3:20.)
The regulations are expected to be adopted in final form this fall.
En español »