Calls intensify for California regulators to take action on chlorpyrifos 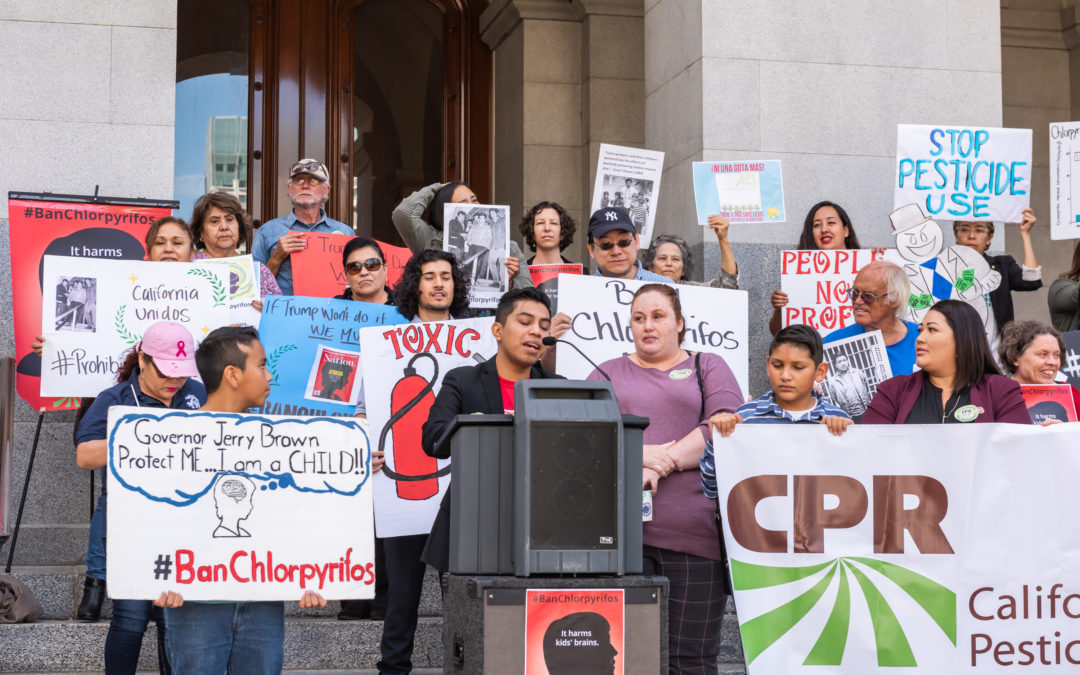 Sacramento, CA – The U.S. Justice Department has requested a rehearing of a decision by the 9th Circuit Court of Appeals to revoke all tolerances of the neurotoxic pesticide chlorpyrifos within 60 days, putting the proposed federal ban back in limbo for the foreseeable future. The stalling tactic is the latest in an eleven-year struggle over the fate of a pesticide known to cause autism, ADHD and IQ loss. Health advocates in California are now renewing their call to state regulators and Governor Jerry Brown to take immediate steps to end use of Dow Chemical’s blockbuster insecticide in California where almost a million pounds are used annually.

Anger at the state’s lack of progress on a chlorpyrifos ban spilled over Thursday at the State Capitol when dozens of advocates and residents of farmworking communities gathered to meet with their legislators and deliver letters to Governor Brown on behalf of nearly sixty health, labor and environmental justice organizations. The governor’s office has received close to 7,000 letters from concerned residents calling for a ban.

“I want the governor to understand this is personal for me,” said Cristin Romo, a Watsonville schoolteacher who has witnessed the terrible cost paid by rural children, including her own. “ I believe my sons were impacted for life by chlorpyrifos, and no one seems interested in doing anything about it. I don’t understand why our elected officials aren’t protecting us.”

In 2007, the US EPA was ordered by a federal court to make a decision on the safety and continued use of chlorpyrifos, which was banned in 2000 for household use because of its neurotoxic effects. After almost a decade of study, in 2016 the EPA finally proposed an end to all food tolerances for chlorpyrifos. But in one of his first official acts, disgraced former EPA Administrator Scott Pruitt defied agency scientists and refused to finalize the ban.

In the year and a half since, the California Department of Pesticide Regulation has undertaken its own lengthy scientific review, ultimately concluding that young children in California risk permanent neurotoxic effects from exposure to unsafe levels of chlorpyrifos in their food, water and air. DPR’s report recommended listing chlorpyrifos as a Toxic Air Contaminant, while a separate agency last year added chlorpyrifos to the list of toxic chemicals under Proposition 65.

Too little, too late, say advocates who’ve been pushing the state to act boldly, citing the overwhelming body of independent scientific evidence of chlorpyrifos’ harm, and the May decision by the Hawai’i State Legislature to ban the hazardous chemical.

Since DPR released their Toxic Air Contaminant report in June, no new restrictions have been proposed. Instead, DPR has laid out a timetable for further deliberation that extends into 2021. Meanwhile, the half-million children born in California each year face the threat of irreversible harm to their developing brains caused by continued use of chlorpyrifos.

“State scientists and regulators agree that young children are at risk of brain damage from exposure to chlorpyrifos,” said Mark Weller, co-director of the statewide coalition Californians for Pesticide Reform. “Why aren’t they acting to protect our children, given what they know about the hazards of this chemical? The house is on fire, and all they’re offering is years of red tape.”